Thailand is a beautiful place to visit and you know you’ll have fun hitting all the host bars, go-go clubs and smoking hot discos. But, how exactly do you get around town or from city to city?

Part of the joy of visiting a foreign country is learning the local transportation system, but it can also be very frustrating if you don’t know what you are doing. The good news is that many people in Thailand do speak English (with the obvious exception of the cab drivers), so you can always find someone to ask for help.

Still, it’s good to have some basic information at your fingertips before you arrive – just so you can feel more comfortable and have some idea what you are doing.

After all, you don’t want to spend your entire trip in your hotel room!

Here is a brief overview of what you can expect when you are trying to travel around Thailand. Please remember that this guide was written at a given moment in time. Things can change quickly in this part of the world, so it’s always a good idea to check with your travel agent to see if there are any important updates:

Bangkok’s International Airport (code BKK) is one of the busiest in Asia, serving more than 16 million passengers a year. It serves more than 70 airlines 24 hours a day including local and western carriers. 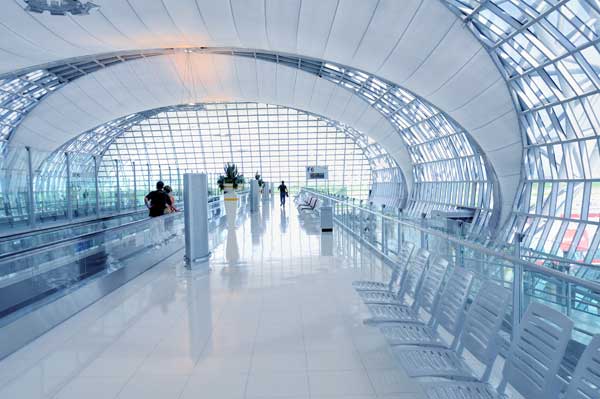 The airport is fully equipped with bars, restaurants, VIP rooms and all of the other modern conveniences you would expect from a major international airport.

Bangkok is a very crowded city. It is so crowded, in fact, that you won’t want to spend too much time walking from one part of town to the other. Thankfully, in 1999, Bangkok opened the Skytrain, an elevated train system that serves the same function as a subway or metro in other major world cities. The Skytrain has a reputation for being very clean and fast, so it’s always a good idea to find out if it is stopping near where you want to go before you decide to walk or take a taxi.

Unfortunately, Bangkok is the only city in Thailand with an internal rail system, so if you decide to travel to the other metropolises, you will be stuck with more primitive forms of transportation.

On the other side of the technological spectrum, many Thais, and some tourists travel from village to village on Elephants. While this is not the fastest mode of transportation available, you are bound to get a great view on the back of a pachyderm, and it will give you an interesting story to tell people back home. Recently, Thai officials have banned elephant transportation within the city of Bangkok.

Taxis are plentiful in Bangkok and in the other major cities. They are usually very clean and air conditioned so they can often be a good alternative to trying to walk from one part of a city to another.

The downside is that most Thai taxi drivers do not speak, read or vaguely understand even a single word of English. So, if you don’t have a Thai speaking guide with you, you could be in trouble. Most hotels have printed cards for both their establishment and popular tourist destinations. What you want to do is hand that card to the taxi driver. He or she will be able to read it and figure out where you need to go.

By law Thai taxi drivers have to have the meter running at all times. Yet, some try to cheat tourists by leaving the meter off. Make sure that he or she turns the meter on before you get into the taxi. If he or she refuses, do not get in the cab!

Tuk Tuks are another interesting travel alternative in major Thai cities. They are similar to taxis, but only have three wheels and only two people can fit inside. On the other hand, they can be much cheaper. Tuk Tuks do not have meters, so you have to negotiate your price in advance to make sure you don’t get ripped off. Because they are smaller than taxis they can weave in and out of traffic to help you get where you are going very quickly. Samlors are currently banned in Bangkok but can still be found in other Thai cities and villages. Essentially they are slow moving bicycle powered rickshaws. They should be avoided if you need to get somewhere quickly, and you need to negotiate your price in advance. For the most part, you want to use a samlor simply so you can have a cool picture to send back to your family and friends back home.

The state-run Thailand train system has many things going for it. Speed is not one of them. Compared to the west, these trains go very, very slowly from city to city.

The good news is they are cheap and can be very comfortable. When picking a train make sure you select one marked “Special Express.” The ones marked “Ordinary” move slower than a virgin on a first date. Also decide what class you want to ride in. Third Class is a horrible cesspool of wooden benches that you will probably want to avoid if you have any respect for yourself at all.

Second Class is similar to what you would expect on a modern train system, complete with reclining seats. First Class is still reasonably priced and will provide you with a private air conditioned cabin.

Sleeper trains can be a very good deal and you can get both dinner and breakfast on the train itself.

Buses in the major cities come in all shapes and sizes. Some are large modern western style buses. Others more closely resemble flat bed pick up trucks. They are all dirt cheap, but if you don’t speak Thai it may be nearly impossible for you to figure out where they are going and when. You get what you pay for. If you don’t mind crowds, city-to-city buses can be a great alternative to the slow moving train system. They will get you where you want to go much more quickly for about the same price as a train. On the other hand, they can be very, very crowded, which can lead to an uncomfortable ride. Within the major cities you can often hire a ferry or boat to take you where you want to go – as long as the river is heading in the right direction. They are dirt cheap and very relaxing, but you will need to keep your eyes open to figure out exactly where you need to get off. If you are in Bangkok you can hire chartered boats to explore the nearby canals.

In most parts of Thailand you can rent bicycles, motorbikes and cars if you want to take charge of your travel experience.

For the most part, you are probably better off with the cheaper and safer alternatives of public transportation – but we understand that sometimes you just want to get out on your own.

That said, renting a bicycle or motorbike is probably a big mistake. You will have to dodge crazy drivers, potholes, goats and assorted dangers beyond your imagination. There are better ways to take your life in your hands. Many foreigners tend to rent the motorcycles and have no problem. Remember that no matter what the company you rent from says, if you break it, you buy it. True insurance is often not true insurance. If you rent a bike and wreck it, be prepared to pay for the repairs or a new bike. That being said, there is a wonderful feeling in riding around most cities on a bike. You will have total control of your itinerary and the city is at your footsteps waiting for you to explore!

If you do rent a motorcycle, wear a helmet. It is the law and you will get fined if you don’t. Often the fine is 200 baht but if you don’t have the cash, they may impound your bike. Also, anyone riding with you is required to wear a helmet. We cannot tell you the number of times we have been stopped because the boy on the back of the motorcycle wanted to hold his helmet and not mess up his hair. J Make sure all that are with you have the helmet on!

Renting a car is obviously safer, but is apt to be very expensive and if you get lost, it may be hard for you to find someone who speaks English to guide you home.

If you do rent a car you will need an international driver’s license.