When you go to an exotic new country, one of the best parts of the experience can be sampling new taste sensations at the local restaurants. 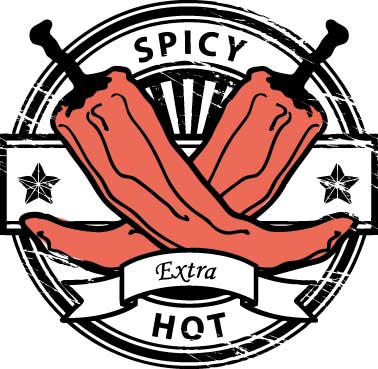 Thailand is no exception. This is a country of culinary delights. From the extra spicy to interestingly sour you will find a wide range of local foods that will delight your taste buds, fill your belly and soak up tons of booze before you hit the town.

Thai food is typically spicy and has many herbs and spices; this is for a few reasons. 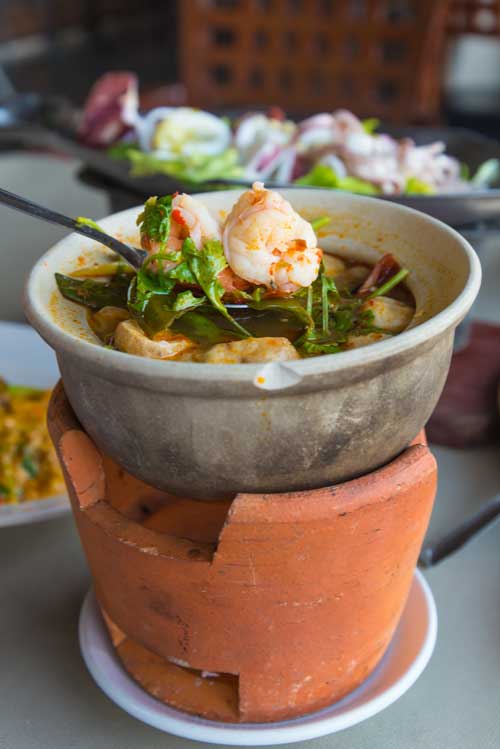 One, Thai’s love spicy food and two, the spices often have medicinal purposes.

Many of us from major western cities already have a fairly good idea of what Thai food is from our own local restaurants. Still, the food here is obviously going to be better, made with local ingredients and not exactly what you expect.

The first major difference that you will notice is that there is no knife on your place setting. Instead you get a spoon! 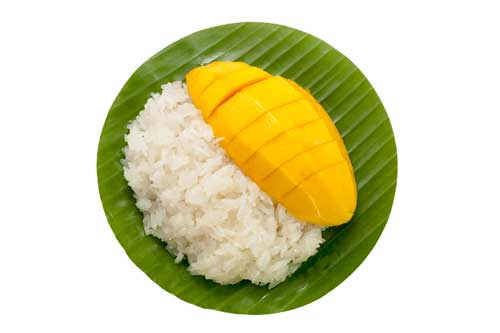 This goes back to ancient Buddhist customs where serving someone a large piece of meat would be deeply offensive; so all pieces of meat or fish are already cut into small portions that can be easily brought to your mouth with a Thai spoon. 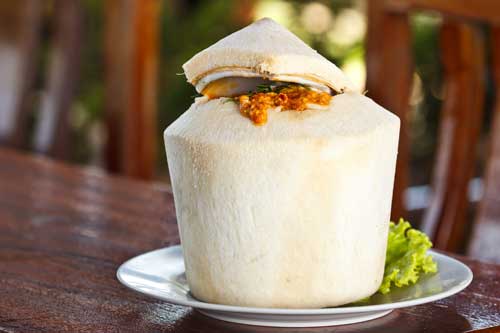 Soup also comes with every meal; but unlike in the west they don’t eat it as a separate course. Instead it is enjoyed at the same time as the main course as a way to incorporate a variety of taste sensations.

Almost all Thai meals are served with a plate of rice. 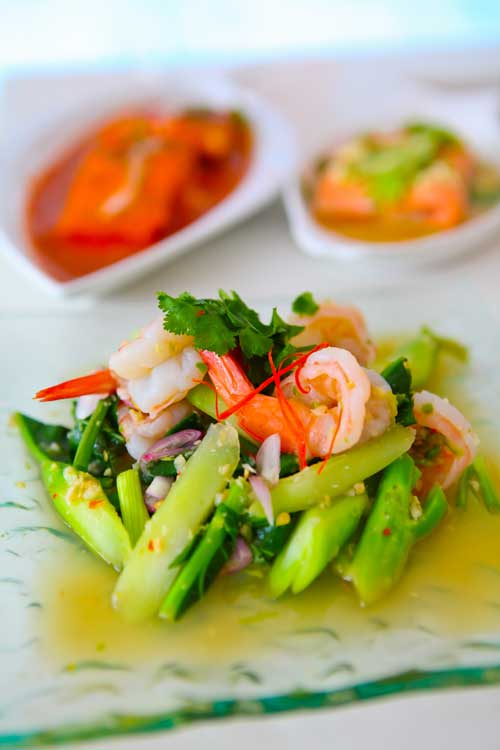 This is also part of the Buddhist way of looking at meals. 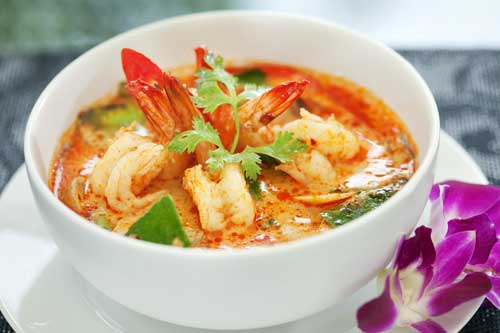 A Different Type Of Curry

Curry is used in many Thai dishes but in a different way than you will be used to if you associate it with Indian food.

Indian curries tend to burn in your mouth for long periods of time Thai curries, on the other hand, tend to burn hotter at first, but quickly diminish in your mouth. Nearly all Thai food is spicy. Hot peppers are in most dishes. If you want non spicy, make sure to request that! A typical Thai meal incorporates many different courses including:

* Tidbits: Small items to get your appetite going including spring rolls, satay and puffed rice balls.
* Hot Salads: These are often spicy and more often than not have meat or fish in them.
* Main course: Served with soup and rice.
* Dips: Sometimes a main course all their own, sometimes they are included to be shared as part of the tidbit or main course. They are accompanied by vegetables or small pieces of meat.
* Curries: These can also be a main course or stand out on their own. Curries almost always have meat or fish in them.
* Desert: Because of how spicy most Thai meals are, Thai deserts are often much sweeter than you may be used to. They may add the pounds but they will be delicious! 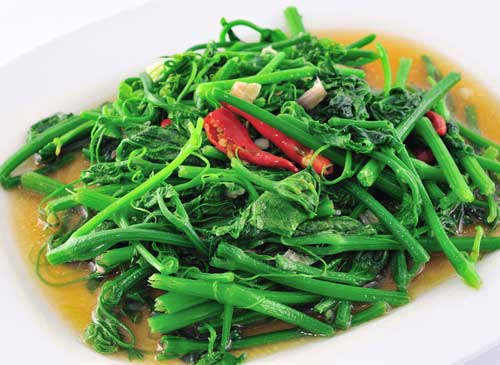 Remember that Thai’s don’t differentiate between Breakfast, Lunch and Dinner. So you will not find the wide variety of breakfast foods that you will in most places. There are tons of restaurants that cater to foreigners and that have excellent Breakfast food and buffets.

It is not unusual for Thai restaurants to serve food as it is ready. It is not considered rude to begin your meal when your food arrives. I have been to restaurants where I was finished with my meal before my friend’s food arrived.

This is not uncommon and not considered rude to eat when your plate arrives. 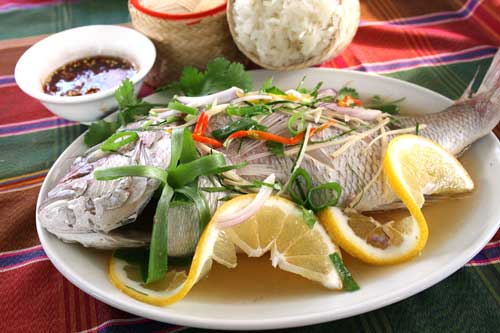 It is also not uncommon for a group to order and all share the same meal. I have seen many Thai’s order 3 plates of food and then just share at will. If you have an aversion to someone taking food off your plate, you need to make this clear as most people that eat here do so in group settings and it is considered part of the meal to share.

Most places you eat will not offer ‘real’ napkins or paper towels. Instead, they bring you toilet tissue. Again, don’t be offended by this. It is just part of the course. You will also notice that after a meal, most Thai’s get up and go to the rest room and wash their hands carefully.

Tipping is not considered necessary but it is VERY appreciated. I suggest a tip of 20 baht to 100 baht for a meal. It all depends on the price. I know most that read this will disagree but if you have a great meal and you had good service, give a nice tip to your waiter. To do this, you place the tip outside of the bin. If you place the tip inside, it is shared with the entire staff or goes to the owner. If you want to tip your waiter, pay your bin and think separately give them 50 baht (or whatever amount you have decided on) in another hand. This assures that the tip goes to them. 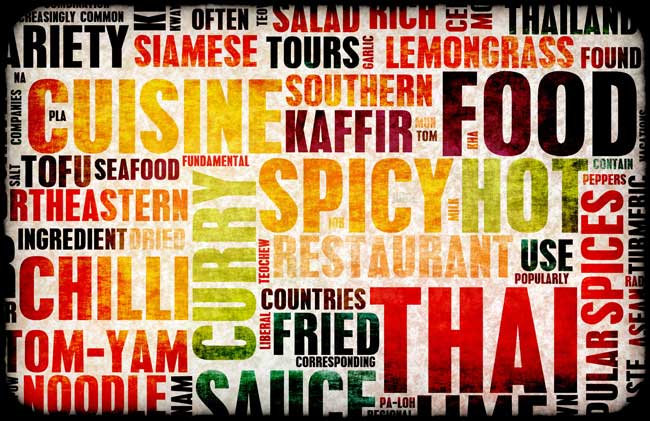