As you travel through Thailand you will be amazed at the number of orange robed men and boys who seem to be everywhere. With their well shorn hair and constant smiles, the Buddhist monks are an iconic image of Thailand. Yet, while monks are an integral part of the local landscape, many westerners know very little about their lives or what makes them tick.

How are they different from Christian monks? What goes on in their day to day lives?

The answer is that Thailand monks live a very different lifestyle than their western counterparts.

Buddhism is a much less restrictive religion than Christianity and a monk’s life is reflected by this. Unlike Western monks, the brothers of Thailand do not necessarily sign up for life, do not do penance and are often an integral part of the community. The monks of Thailand are encouraged to find joy and happiness in their lives – while Christian monks live a life of pain and sacrifice.

While Western monks are seen as solitary dour men, in Thailand they are seen as normal joyful members of the community.

Part of this sense of community stems from the fact that Thai monks are seen by the people nearly every day. When was the last time you actually saw a monk in America?

Overall there are roughly 300,000 monks in Thailand that come from all walks of life – rich and poor, urban and villagers.

Buddhism is not only one of the world’s oldest religions – it is also one of the most widely followed. Nearly 1/5th of the world’s population follows Buddhism in one way shape or form – yet nearly all of them live in the East.

The purpose of Buddhism is to find The Way – and that is the goal of every monk, whether novice or elder.

The Way is a mental and physical outlook on life designed to eliminate sadness and misery and create a sense of joy and calm.

This view of life celebrates education, compassion and a rejection of personal possessions.

A monk’s true ambition is not physical assets, but true emotional happiness and acceptance of the irony inherent in every life.

At the nation’s roughly 32,000 Buddhist monasteries the monks follow the teaching of the Buddha to find The Way.

This is why you will often see monk’s smiling, laughing or simply sitting at peace with themselves and the people around them.

Because the monks never require a lifetime commitment from any of their members, many adults will join the monastery when they face a particularly difficult part of their lives – more often than not for a period of three to six months.

The idea is that they can use this time to realize their mistakes, plot a new path in life and get closer to finding The Way.

The Young Boys In Orange

One of the most striking things about Thailand is the sheer number of young boys who wear the orange robes that signify monastery membership.

Many tourists seem shocked at the idea that boys this young may be pressured into dedicating their lives to a religion they may be too young to really understand. Most of these boys will not spend their lives as monks. They will grow up to live completely normal lives in society as doctors and lawyers and laborers.

Most of these boys are Novices – sent to the monastery in search of a better life than can be found in their families’ villages or inner city ghettos.

Unlike in America it costs money for a child to be educated in Thailand. Many Thai families can not afford the costs of the local schools. In fact, Thailand faces such poverty that many families can barely afford to keep food on the table for their children.

That is why the monasteries are popular. A child sent to a Buddhist monastery will be taught to read and write and gain the education skills he will need to live a happy productive life as an adult.

A child in a monastery will also never go hungry. So, sending your child to wear the orange robes is often the best thing a loving family can do for their young boys.

While some of these boys will choose to become an elder and stay in the monastery their entire life, most will not.

All that have spent the dawn of their lives in the monasteries will carry the experience with them forever and have an understanding of The Way that will help them through life’s inevitable challenges.

There is a saying in Thailand that means “A boy does not become a man until he has been a monk.”

Other than the bright orange robes – which cover the entire body except for the right shoulder – the shaved heads are one of the most striking visual representations of Thailand’s monks. 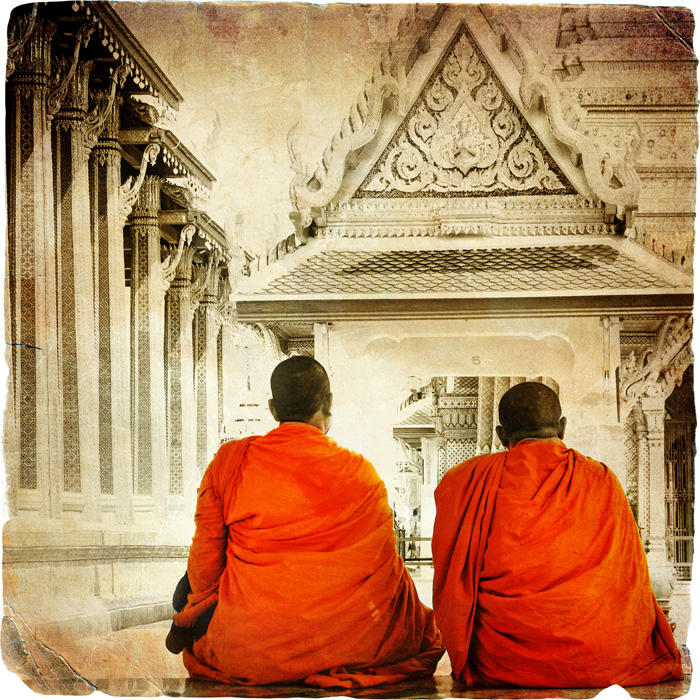 While all of the monks do shave their heads the sheering is done with as much reverence and care as any other part of their lives.

Once the hair has been cut from their heads it is placed on a lotus leave and then put in a river to float off in honor of the Buddha and nature itself.

A Day In The Life

As you would expect, Thailand’s monks follow a remarkably regimented life.

Every day is much like the other and every monastery follows about the same schedule as all of the others. These schedules are literally thousands of years old and are not likely to change in our lifetimes.

Most monks wake up around 4 or 4:30 in the morning to the alarm of the temple bell. They rise quickly because it can take up to a half hour to properly arrange the orange robe in any of the four ways that have been prescribed by Buddha through the ages.

Around 5 a.m. the monks – fully robed – gather in a central temple area and begin their morning chants. Immediately following the chants, the monks – elders and novices alike – then engage in group meditation until the sun rises – signally the beginning of their day.

As the light of day starts to spread around the village it is time for the monks to begin walking through the town seeking alms.

The monks need these offerings because they are permitted no worldly possessions of their own and are at the mercy of the kindness of the villagers.

While there is no obligation for anyone to give offerings to the monks – most people are proud to offer what they can to these robed men.

The monks walk barefoot with a tray over their heads. When they get to a home where a family is ready to make an offering, there will be someone – typically the oldest woman in the household – on her knees awaiting the monk’s arrival.

Most villagers will offer food, flowers, cake and fruit. It should be noticed that the monks make their rounds in silence and never ask for the offerings. Even the poorest villagers are happy to show that they can contribute as it is part of their long local traditions.

After the rounds, around 7 in the morning, the monks return to the monastery to eat breakfast.

The next few hours are spent doing the work that needs to be done to keep the monastery running, including washing of robes, cleaning and physical maintenance.

When a monk is done with his chores he will then begin reading and studying until 11 a.m. when the temple bell rings to announce the second meal of the day.

As the monks prepare for their meal, peasants will again come to the monastery with offerings of simple items the monks might need – like toothpaste or soap.

This meal is eaten with care, because it will be the last time they are allowed to eat until breakfast the next day.

After the meal, the monks return to their primary responsibilities which include work, study and meditation on The Way. If a monk needs some simple possession he can ask an elder for permission to visit the village again, though this is not very common.

Around 7 p.m. the monks once again gather together for the evening chant and group meditation celebrating the Buddha. When this is done the monks return to their huts for the rest of the evening.

Mon’s typically share their hut with one other brother and have to maintain a certain level of conduct in the dwelling. Their bare feet can never point towards any book or image of the Buddha.

It is forbidden for a monk to sleep in an elevated bed or to have any soft material in his sleep quarters. Therefore nearly all monks sleep on the floor.

Treat The Monks With Respect

When you visit Thailand it is important to remember that the monks are not tourist attractions. They are dedicated individuals who are revered in their communities.

The monks will often be friendly towards you – and some will allow you to take their pictures. This does not give you license to treat them as simply a fun part of your trip.

Treat the monks as you would any religious person in the west and you will avoid getting a reputation as an Ugly Foreigner!